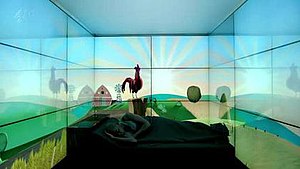 Imagine a future where the partnership we have with our screens (black mirrors) evolves to the next level.

In the second episode of the first season of Black Mirror, the screens of our media are no longer held in our hands, they are the walls of our homes, projecting animated images more bucolic than nature can deliver. Think Disney.

And who powers these lighted screens of our lives? You guessed it, we do. On gym exercise bikes we pedal for hours each day to stay in shape and power the grid, earning points like salaries which are then spent on time in bed, toothpaste, food and screen choices. Think Time Warner.

In the future the series depicts, it costs points which we pedal like hamsters to accumulate in order to sleep. Worse, and this is the gift of the episode, it even costs points to decide to close your eyes and not consume a program you might find offensive. Alarms sound and the screen blinks the warning "Resume Viewing!"

The story shows the protagonist struggling but sadly coming full circle to also fall into the trap that took his girlfriend, entering the entertainment slave class to become perform for the programs that distract the peddling slave class.
Posted by Linda Cuellar, Ed.D. at 7:33 AM No comments: Links to this post

The Artist Holds Up the Black Mirror 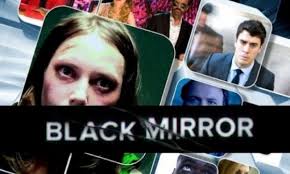 The first episode of the Netflix series, Black Mirror, had me at hello.
I'm so grateful to the friend who recommended I try it. P.S. Not family friendly.

Here are five things about the episode that we watched last night that will make me keep watching.

1. I loved Twilight Zone as a kid, so my first impulse was to think this was a reboot. It's not. There are so many layers more that I see just how much the medium of TV has truly evolved.

2. The story is about technology and its power. The storyteller is the artist, a painter living in London, who is able to show us what he sees in a way few of us could imagine.

4. The episode is less about a pig than it is about people. This is us.

5. Our screens are extensions of ourselves, our senses and attention. See McLuhan.

Posted by Linda Cuellar, Ed.D. at 6:48 AM No comments: Links to this post 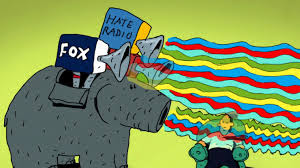 Does TV influence us? There are truckloads of variables to consider in answering this question: How much TV do we watch, what is the content of what we watch, what do we give up to watch it, who is there or not there to discuss its programs and themes. It's like asking Do friends influence us? It depends.

Does taking in a hefty diet of Fox News and conservative talk radio shows impact how we view the world? There are lots of variables that enter here, so it's not a yes or no kind of question. But the question takes an interesting twist when it's seen through the eyes of a loving daughter worried about her father's personality changing into an hardline conservative who she barely recognizes.

Amazon Prime's documentary The Brainwashing of My Dad   made me think that the questions the filmmaker explores may end up in the same heap of questions that have evidence to support opposite views, for example about video games or violent TV programs and their impact on people.

There are truckloads of data to support the pro and con of media and its impact on people, but on the Fox News and Radio Talk show influence explored in the documentary, I side with the filmmaker, remembering Dr. George Gerbner's Mean World Theory (Cultivation Theory) and the communication research that he he pioneered.

Outside of the filmmaker's experience and the interviews of her subjects, what emerged as equally important is the evidence she presents about the history of eliminating the Fairness Doctrine and the funding of conservative media outlets and think-tanks that undergird the media landscape that TV and radio currently occupy. Still many questions, such as what similar inroads have been made to make fear the driving force on the Internet and the business models currently in place there?