Of dinosaurs and donkeys 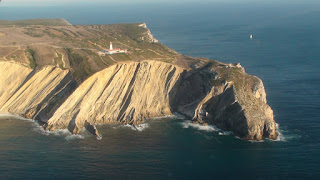 A two-hour hike from here, Cabo Espichel is the site where centuries ago, Portuguese fishermen discovered the footprints of a strange beast spanning 20 feet of calcified mud. Having not yet heard of dinosaurs, they saw them as evidence of the miracle of Mary, our Lady of the Sea, emerging  from the ocean with the baby Jesus in her arms, riding--what else, but a donkey.

Never mind the difference in size of hooves, or, take your pick of any number of valid questions. That's the story that took hold, and it has prevailed for nearly a thousand years on this craggy cliff overlooking the churning Atlantic.

After our nearly four mile hike to Cabo Espichel from our cottage at Slow Living Glamping, we ate a most rewarding lunch of clams in butter and garlic with hearty bread and scallops Viera au gratin prepared in tomato, whisky and cream.

After lunch we passed the church's now empty dormitories, built in phases between 1715-1910, for the religious pilgrims who used to journey to the site.  In 1366 a hermitage was built next to the church. It is still standing.

We rested inside the cool, medium sized church built on the promontory overlooking the spot where the Virgin was said to have arrived. The church was built in 1710 with an altar covered in gold leaf with a wooden statue of Mary carrying Jesus. The faces are porcelain and the sculptor created her long skirt with waves of flowing movement. The ceiling frescoes show people in everyday work scenes.

Long before the more famous miracle of Our Lady of Lourdes, believers in Portugal came here, prayed and lit candles for loved ones. As I write this a mass is being said in the active parish that still exists there.

What does a set of dinosaur footprints conjure in our 21st century minds? What images from scientific books or TV and movies inform our present day ideas about these tracks?  What will remain 1,000 years from now of what we think? Probably nothing, but the fossil tracks in the mud at the foot of a Portuguese promontory are a good reminder of the power of story.
Posted by Linda Cuellar, Ed.D. at 3:09 PM No comments: Links to this post 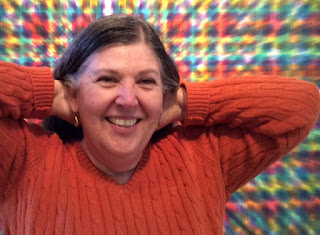 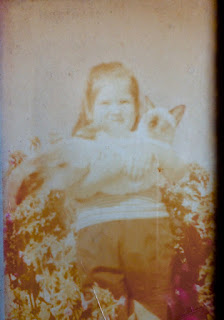 Photos show the me this year and many years ago. I still love cats and remain the same spirit I remember being when I held my first tom, Kitty, for this snapshot.

Something tells me 62 is gonna be a good year.

As the birthday week approached I became more introspective than usual. Fortunately, I found that I encountered people, posts, blogs and other messages that helped to shape the questions forming in my soon-to-be-62-year-old self.

The year behind me had been a big one. With health issues for myself and for my brother, I've had more than my share of reason to think BIG idea thoughts such as:

"What is life about?"

"What have I done to contribute to a better world?" and, more importantly:

"What changes can I make to make my time ahead, whatever the length, purposeful?"

While traveling this summer in Portugal with so many cultures and eras of history at hand, then later encountering the same in New Mexico, I kept studying the question, "What is identity?" Is identity formed and dominated by one factor, such as gender, ethnicity and culture, orientation, political leanings, musical tastes?

It was enough just to ask the question, because several events in this summer's violence unraveled enough information for me to consider.

The attack on the Orlando nightclub caused one of my close pals to write saying he had decided to arm himself from now on, since he had once been physically threatened leaving a gay nightclub in New Orleans, and the tragedy of Orlando caused him to once again feel threatened.

I thought about his decision and considered the choice right for him. He is a long-time hunter with years of experience handling guns and rifles. Should I try to follow suit, or do I need another approach?

Soon after the Orlando attack, NPR interviewed a man who had been at the gay nightclub on the long night of terror, but who had left the club only a few minutes before the attack.

His interview concluded with a solution to another question roiling in my mind, "How does this attack on my identity and sexual orientation affect me?"


SHAPIRO: See you lost maybe five friends that night.
MELTZER: Five and one acquaintance that was injured. I just got word that he's doing really well in the hospital after surgery, so that's happy news.
SHAPIRO: The first time you see him, what are you going to say?
MELTZER: I'll ask him, when are we going out again? That's what I'll say.
SHAPIRO: (Laughter).
MELTZER: That's what I'll say. I'll say, when are we going to go have martinis again?
SHAPIRO: There are going to be people listening somewhere in America who will hear that and say, what are you, crazy?
MELTZER: No, I'm not crazy. I'm just not going to subscribe to fear. We're a strong community. You know, we're gay men....we live in a world where we get a lot of hate. We take a lot of hate. And we know how the world feels about us. And we're strong people because we live in a world that wasn't made for us. And if tomorrow somebody took over this country and said, we're going to kill all the gays, I will be the first one in that square saying, shoot me with my big flag all over the place because I would rather die for what I stand for. You can't kill me. I'm an idea, I'm timeless.

The entire interview is here:
http://www.npr.org/2016/06/14/482055708/orlando-shooting-survivor-volunteers-as-translator-for-victims-families

"Who would you be if the world never gave you a label?"

The sniper's killing of police in Dallas followed the Orlando and Istanbul airport attacks and more U.S. police killings of African Americans detained for routine reasons. This after numerous deaths of Blacks at the hands of law officers this past year. The news of police abuse of African Americans filled the airwaves and set off protests around the country. I watched anxiously as grand juries returned many officers to work without punishment.

Social media reflected the rage over race in ways that reminded me of the riots in the 1960's.  It seemed that we had gone even farther back in time to the Civil War when the Mason Dixon Line divided our country. This time the line was drawn between those Americans who were "either or" with no shades in between: Either pro-Police or pro-Black Lives Matter.

Our divisions only underscored our inability to communicate. When I thought back as to why the rift seemed insurmountable, I remembered a documentary interview I had with a professor from University of Texas at San Antonio in the 1990's on code-switching and other phenomena connected with speaking two languages. He explained the paradox of being bilingual or monolingual is that we are basically unknowable to each other.  A bilingual person himself, he explained his studies had taught him it was nearly impossible for a monolingual person to understand what being bilingual is.  Conversely, it's just as hard for a bilingual person to understand what it is to be monolingual.  It's not out of purposefully being contrary or ignorant, but the results are similar.

Over the years I've felt the same rift between bi-culturals and monoculturals. Or, between those who like country music versus those who follow electronic.

Thankfully where some only see lines of division, others see opportunity to ask fresh questions. I was blown away by this 2015 video that recently appeared on my Facebook feed that asked "Who would you be if the world never gave you a label?"


The Nigerian novelist, Chimamanda Adichie, who spoke in a 2009 TED Talk described her frustration with the "single story" she was met with and the stereotypes it produced when she came the United States to study as a young woman. She said, "The problem with stereotypes is not that they are untrue, but that they are incomplete. They make one story become the only story." The solution she proposed is to have a "balance" of stories, numerous stories that create a better representation.

The more I thought about identity, the thornier the problem appeared to me. Was I first an American and then a female? Was I first a woman, then a person with a sexual orientation? First a Chicana, followed by nationality?

The (wo)man in the mirror.


I carried these questions all summer and felt relief when I realized my separations had been false all along. I only had to look in the mirror to see why:  Was I a brain first, followed by a heart or liver? Of course not. Wouldn't my brain bake dry without my heart or lungs or kidneys?

Any human is a balance of identities, just as they are a balance of biology.  The little girl that became the woman in her sixties is not one story, and neither is anyone else.

I don't need to rush to judgement and grab at the first story when I encounter someone different than me. I can give us both the time necessary to see beyond the headlines, the click-bait and resist the impulse to move on to the next thing.