If the study of people is the definition of anthropology,  Brantley Baird, without the benefit of academic degree, is a top- notch anthropologist.

The weathered, careful speaking and listening lanky octogenarian with a gentle demeanor is a born and bred Arizona cowboy. When he married 60 years ago he began his work on the ranch belonging to his wife's family now known as the Rock Art Ranch.

In the vastness of the Arizona desert and canyons, his study of people began with reminders that the family ranch had been home to other families, perhaps hundreds of them, both in both recent history, and, as he would come to learn, from more than 9000 years ago.

Brantley's study of people began with finding shards pots bowls cups and other hunting tools. As Brantley went about hunting and tending to livestock, he came across areas on the ranch where evidence of homes from the past emerged after gullies were washed in flash floods. It was Brantley's careful observation that two sites were uncovered on the ranch where Navajo, Hopi and Anastazi had cooked, reared families, hunted, traded and used weapons,  playing their corresponding roles in defending or expanding their tribe's territories.

Over the years, Brantley spotted on the ranch many museum quality examples of native American family life and it's remainders. The bowls, cups, utensils, and tools tell a story of people who raise children worked hard for their living using your resources and held religious ceremonies.

Canyon walls along a creek on the ranch preserve hundreds of petroglyphs of people, animals and inscrutable symbols showing us humans' first written communication.

Brantley's learned from contemporary Navajos who have helped him restore two hogans or Navajo houses on the ranch, one for men and another for women. He showed us the door which always faced the sunrise to direct prevailing eastern winds through the roof opening and remove cooking fire smoke. But there was another purpose for the hogan's roof opening. He pointed to the square of sunlight on the pounded dirt floor of the hogan and told us we are watching the world's oldest clock and calendar. The sun's path across the sky told people the time of day and when during the seasons to plant and harvest crops.

Brantley has also learned from scientists at museums and universities who visit and conduct digs on the ranch's two principal sites, one residential and the other a kiva used for ceremonial worship and prayer.

What fuels this 80 year old cowboy's lifelong interest in the preservation of native culture?  One clue is family. His grandmother was Native American and he and his wife fostered a Navajo girl.

No one knows if Brantley's legacy with will be continued with his kids and grandchildren, but at 80 years, he is going strong as a one man Guide and museum curator of artifacts that he literally stumbled into through marriage and by working cattle on his family's ranch.

Brantley inherited this ranch in the Arizona desert, but has paid back his good fortune with hard work and, one shard and pot at a time, retrieving from the desert and the sands of centuries, pieces of history to preserve and to share with others.

Sent from my iPad
Posted by Linda Cuellar, Ed.D. at 12:11 PM No comments: Links to this post

A mesa is a table and it is also an elevated landform standing above the floor of the desert. For the Acoma it is also a home.

Yesterday at the Acoma village atop a mesa in western New Mexico, our guide explained his tribe's history to us tourists. We had driven off I 40 about 20 miles then boarded a small bus to climb to the top of the mesa.

As he led us past 900 year old homes where 35 families live here year-round. No electricity, no running water. Today there are soar powered communal showers and restrooms installed at the edges of the mesa. He told us of the move the Acoma made centuries before from a mesa nearby. A storm destroyed the steep stairs to the top of the mesa and the tribe sent out scouts in four directions to find their new home, where we now stood.

Children sped past us running to greet our guide with leaps and hugs. He greeted them warmly and led us through the village telling us about Acoma history and the contact with the Spanish military and religious. He spoke of the cruelty of the slavery the Europeans had imposed to build the Catholic Church here, but he included the education and care received by the Acoma people from the Franciscans in particular.

The mesa, like an island in an ocean of sky and endless desert, gives its people protection and a place to call their own. The survival of its residents through centuries of storms and invasion from foreign forces were reminders of the timeless qualities that drive our existence, such as faith and perseverance.

As we ended our tour, residents set up tables outside their homes to sell us samples of their beautiful pottery and jewelry. I had decided to leave my money in the car 350 feet below, so instead of shopping I scanned the horizon for the last time this visit before hopping back on the bus.

I was lost in the stillness and beauty of the moment when I was abruptly returned to the 21st century. A movement over my head caught my eye and I turned to see an Acoma man stretching his arm up, holding a smartphone and waving it in the air to catch a signal for the credit card purchase he was processing. 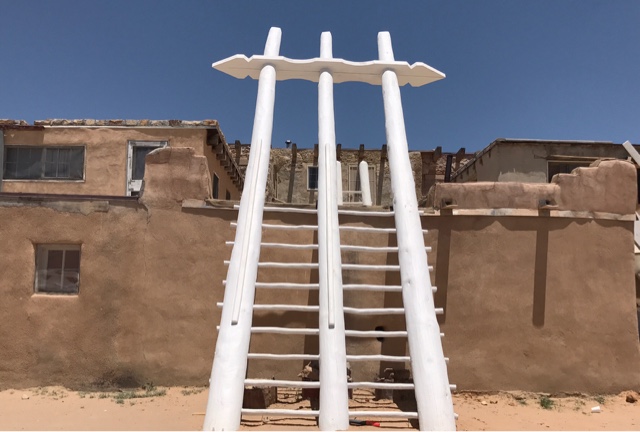 Posted by Linda Cuellar, Ed.D. at 7:10 AM No comments: Links to this post