Deliver Me From Arizona 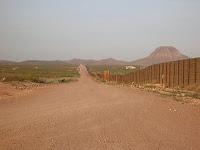 Our Father, Who Art in Heaven: What were You thinking when you created Arizona elected officials?

This question comes from an Arizona-born, but reared and educated as a “Got-Here-As-Soon-As-I-Could” Texas transplant. This dual citizenship of a sort has made me wonder how two states that make up the major part of the U.S. –Mexico border could be so different in their approaches to immigration.
The answers I’ve come up with are as follows:

(I have had some help with this vexing question from historians at the college where I teach).

1. Arizona legislators put in more hours than ours do in Texas. Ours only meet every two years and for special sessions called by the governor, while theirs meet every year. I’m normally not a less-government-is-better kind of person, but in this case I’m apparently sipping tea.

2. In Arizona, the border with Mexico is a fence dividing the vast, sparsely populated Sonoran desert. You could see it from our back yard in Douglas, where my family lived for 19 years, and where my Dad was killed in a copper smelter accident when I was a toddler. In Texas, the border with Mexico’s Tamaulipas and Chihuahua states is a river, where villages and towns have thrived for more than 300 years.

3. Every year for the better part of this new century, 300 undocumented workers, also known as people, died crossing the Sonora. Last month, unknown thugs murdered an Arizona rancher. The death enraged residents and sparked the state’s lawmakers to pass a controversial law allowing local police to stop those they suspect of being here illegally to show legal work permits or citizenship. One person dead is too many, but you have to wonder if the Arizona lawmakers were wearing cultural blinders not to react in similar shock to the deaths of thousands in the state’s desert.

4. Culturally, Texas’ history is intertwined with those of Spain and Mexico. There have been serious conflicts, some still unresolved. But there has also been, especially at the border, many surprises and successes in the blending of two polar opposites. It takes real grit and tolerance to smooth over differences between such strikingly different cultures, but the Tex-Mex border has been working at it for fun and profit since Texas won its independence from Mexico. This “best of both worlds” brew of heritages is ultimately stronger than any divisions, despite and including dispiriting health and economic problems, and the recent return of the worst of the Wild West, lawless drug cartel thugs.

5. Follow the money. Both states’ largest trading partner is Mexico, yet according to the Department of Transportation, in August of 2008, Texas’ trade with Mexico was estimated at $8.3 billion, while Arizona logged in $787 million in that same month’s business with Mexico.

6. Money talks, but votes talk too, as the old Southwest Voter Registration and Education Project wisely counseled in their bumper sticker slogan, “su voto es su voz” your vote is your voice. According to the U.S. Census, Texan Latinos comprise 36.5% of the state’s population, while in Arizona, Latinos make up 30% of the state’s population. With both the money and demographics talking, it’s no wonder Texas politicians, starting with former Texas governor and U.S. president George W. Bush, have been listening. Their ears are tuned to business and political strategists more than to talk-radio hate-mongers bent on making scapegoats of undocumented workers.

So do we know if the next session of the Texas legislature will pass a law similar to that of Arizona’s? Or will the U.S. Congress finally see beyond election myopia to pass immigration reform that includes a legal accommodation for workers from Mexico? I don’t know, but I do have a sense that the drug cartel crisis will influence the outcome, as well as the new push for our nation’s climate policy. Likewise, Arizona may experience unexpected economic repercussions from the diplomatic fury in Mexico.

Exploring the different stances at the U.S. Mexican border has convinced me that Texas and my birth state, Arizona, diverge in their approach to immigration for reasons that differ as much as their shapes and sizes on the U.S. map. Amen.
Posted by Linda Cuellar, Ed.D. at 7:47 PM 2 comments: Links to this post

Bring Me the Bathtub of Julia Roberts

Email ThisBlogThis!Share to TwitterShare to FacebookShare to Pinterest
Labels: shepherds, Treasure of Real de Catorce: Silver Mine and Ghost Town

Census and The Future of Space-Age Mexicans

Update to Census Bureau Procedures:
This is to request the use of special class “M” algorhythm in the 2010 and all future U.S. census of Americans of Mexican descent.
Special interest is due to this affected population group, whose numbers shall heretofore be counted in multiples of two in blue states and four in red states. This special action is required due to their status as endangered in America’s future, as evidenced in recent futuristic films.
Although recent reports estimate Latinos in the US to number 47 million, with the majority being of Mexican descent, media evidence is clear that without these special Bureau of the Census measures, this demographic group will disappear.
Case # 1: Star Trek-- Note the population of the flight deck of the Starship Enterprise reflects a wide diversity of nationalities, there are no Mexicans to be seen. There is an actor portraying the half-human character, Spock, whose name is Zachary Quinto, who initially appeared to have a Hispanic surname. While he did receive a Catholic education, Quinto is in fact Italian-Irish.
Case #2: Avatar—The native population of the planet Na´vi is blue. Conditions seemed more hopeful for the existence of Mexicans due to the appearance of the feisty, immigrant Chicana helicopter pilot portrayed by actress Michelle Rodriguez. While she was instrumental in saving the Na´vi, she unfortunately died when she used her helicopter to help blow up and defeat the machinery that threatened the Na´vi tree of life and wisdom.
Case # 3 Star Wars—Contrary to earlier reports that Star Wars character Chewbacca was Chicano because he is both brown, and is sometimes referred to as “Chuy” by close friends, it has recently been learned that Chewbacca is in fact of Indian extraction. He is currently working on a DVD set of anger management videos with celebrity physician Deepak Chopra.
One possible explanation for the mysterious decline of Mexican Americans may be traced to the recent substitution of the term “flatbread” for tortilla, “wrap” for burrito, and the demise of the 15 year old Taco Bell mascot and media hero, Gidget (Spanish for “I may be small, but I make a six-figure income”).
Posted by Linda Cuellar, Ed.D. at 9:08 AM 1 comment: Links to this post

Email ThisBlogThis!Share to TwitterShare to FacebookShare to Pinterest
Labels: Census Mexicans In Space 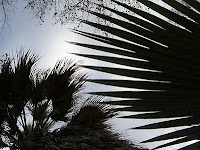 We traveled to the border this past weekend for the funeral of my sister in law Mary's only brother, Larry Hernandez. Our cousins from Guerrero, Martita and Maricela, and their mother, my Aunt Marta attended the rosary and family gathering after the rosary. They informed me that the schools and church are still closed in Guerrero, after a month of violence such as machine guns going off at night. The government has sent in sailors from the Mexican Navy to try and keep the peace in this tiny border town. My cousin's 8th grade girl is going to move to Nuevo Laredo to try and finish out the school year in Nuevo Laredo. They say they have gotten so tired of the violence, but have learned to simply hit the floor when they hear the sounds of gunfire. What a horrible contrast to the peace that once permeated this little patch of hardscrabble country along the Rio Salado where my mother's ancestors settled to ranch and bring up their children.
Posted by Linda Cuellar, Ed.D. at 8:12 AM 1 comment: Links to this post

The Power of Language

Eve Ensler's The Vagina Monologues was a wonderful experience for all of the women (students, staff and faculty) who took part in the two performances we presented at Northwest Vista this week, Monday, March 29 at 12:30 and Wednesday, March 31 at 7 p.m.Thanks much to Professors Melissa Marlowe and Carina Gonzalez-Stout who spear headed the effort.
The amazing thing about the experience was the transformation I underwent with respect to the word, "vagina". I remember telling my office mates that I was auditioning for a play, and I just avoided saying the name of the play, even though I had seen Ensler's video on TV some years back. I remember the audition, at which I was emboldened to speak only after seeing 9-10 teenage girls have the courage to stand up and go through their audition. I remember thinking, if these young women have the courage, so can I. I didn't know then, but it was a case of The little Coochi Snorcher that could. Or should I say the Panocha that plowed forward! It took several readings of my part (The Vagina Workshop) and a rehearsal with my fellow actors to finally get me out of my discomfort zone about saying the word, "vagina". I got pretty good at it, frankly a bit melodramatic, I'm afraid. In my efforts to learn an English accent, I sounded like Count Chocula. Now, after two performances, the word is (almost) alarmingly easy to use. I'm tossing it around at any opportunity-- in front of my office mates, my friends and even my students-- some of whom were in the audience. Yikes!

My question is, if this word had so many locks and keys to keep it hidden, what are other words that need to be said out loud? Any suggestions, and why do they need to be spoken, the way "vagina" does in Eve Ensler's phenomenal play?
Posted by Linda Cuellar, Ed.D. at 8:29 AM 1 comment: Links to this post